Poetry in Art is an exhibit which pairs the writing of regional poets with artists.  Artwork is created for the exhibit based on the poems.
Usually I hesitate to show pictures of a piece before it becomes part of a show because I am afraid it takes away from the viewer's anticipation (for those who plan on seeing the exhibit in person).  This is particularly true of the exhibit "Poetry in Art 2019", as part of the appeal of this exhibit is the revelation of what the artist took from a poem to create his or her artwork.  It is different for each artist.  One may focus on a visual cue while another attempts to capture something less concrete- thoughts, feelings, mood.  Sometimes a poem serves as a springboard, directing the artist to a place seemingly unrelated to the writing.  Working on a project for this event is somewhat challenging, as I am never sure I am doing the poem justice.
I decided to show parts of the piece I created and attempt to explain the elements of the poem that influenced/ inspired me. 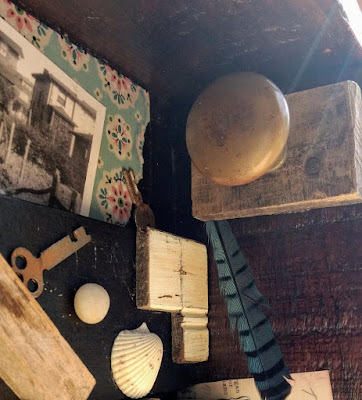 The poet who wrote the poem I chose, "Blue Moon", is Kristine Williams from Athens, Ohio.  There were plenty of visual descriptions throughout the poem.  In my first readings I was very focused on those images.
If this excerpt looks smudged and wrinkled to you, it is. It is a victim of laying on my clay table for many weeks. 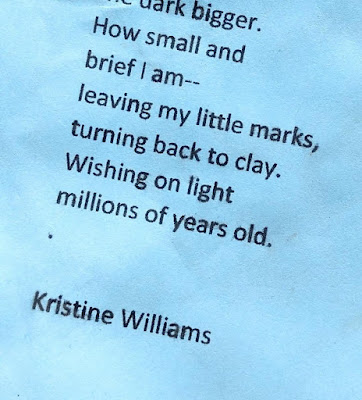 While dithering with myself over the form the piece was going to take I read the poem several more times. Eventually the last few lines and the meaning they contained became more important to me than the images described in the poem. 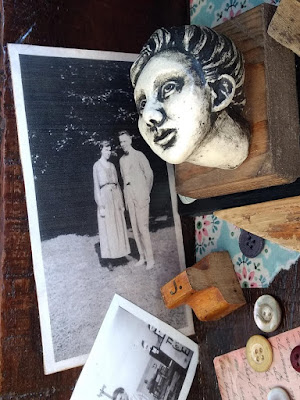 Whether or not I captured that meaning, I'm unsure. More likely, it pointed me in a direction only partially related to the poem. 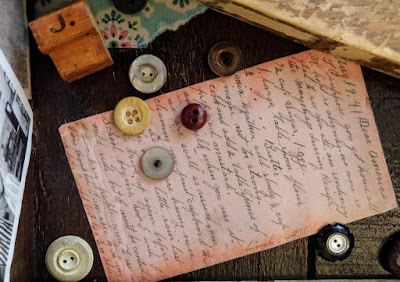 Those lines brought to mind my grandfather who died when my mother was 13 or 14 years old.  I remember being told about him and there are some pictures, but that is all I know.  And I thought how strange it is that this man who was, by my mother's accounts, a large personality and had many friends, is truly gone to the world.  There is no one alive who knew him.
I also thought of the little treasures we squirrel away, things forgotten in drawers, behind the cabinet, old wall paper revealed, letters written long ago- the things that have value because they are a physical reminder of someone, some happening, or a symbol of what went before. 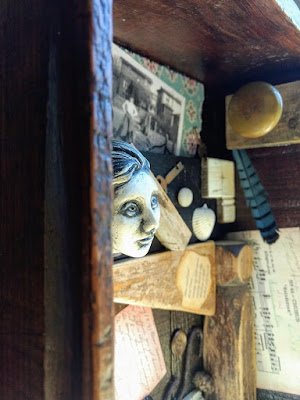 The name of the piece is "Remnants".

The show will be up for a Sept.6 (Friday) soft opening 5-9 pm.  A reading of the poems will take place during another reception, Saturday, September 21, 6:30 pm to 9:00 pm, and will include an artist talk about how the poems inspired the artwork. Poems will be displayed near the corresponding artwork.