As some of you already know, the River City Farmer's Market in Marietta, Ohio has a new location. Still on Saturday mornings, from 8:00 - 12:00, the market is now located on the part of Butler Street between Second and Third Streets. Here's a nice write-up by a local online magazine, Clutch MOV: https://clutchmov.com/river-city-farmers-market-moves-downtown/

So far it's looking like this is going to be a great location. A lot more people are showing up to shop and being downtown close to the stores is a plus for everyone.  As this is an outdoor market (we used to have access to a building), we'll just have to see what happens past October. Right now the plans are that the street will be closed off every Saturday morning through October for the market.

I think this increase in customer traffic is creating a good problem for many of the vendors, like being completely out of mugs, for instance.  The two mugs pictured in the Clutch MOV article were my last two and they sold later that day!  So that is what I am in the middle of right now.  I saw it coming, but while puttering around making other stuff I didn't realize it was coming that fast.  I have lots of pottery sitting on the shelves to glaze and fire but decided to do a little mug catch-up first. 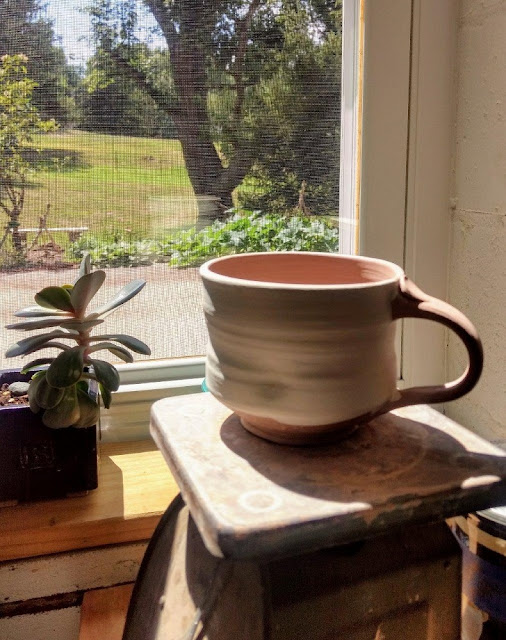 The mug above is almost dry greenware.  Note accidental watermelon vine in the background which is now taking over the driveway. Will soon be dodging watermelons while backing up.

It takes awhile to go from making a mug to seeing a finished product- there's drying to bisque firing to glazing/decorating to glaze firing to decal applying to yet another firing. The mug below is here no more. It sold a while ago, but is an example of what I have planned for some of the new mugs. 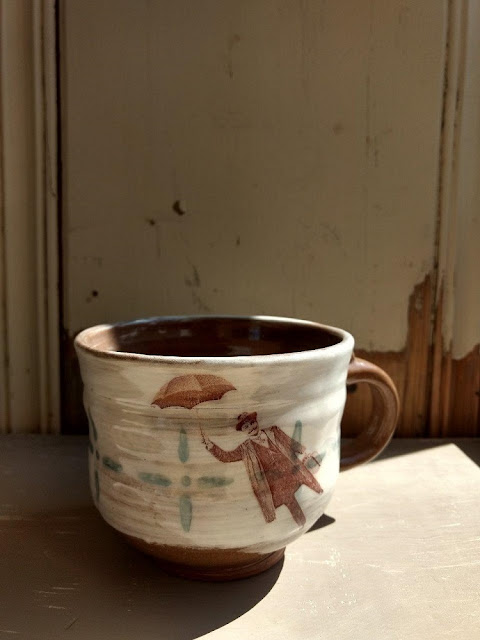 I hope the umbrella is not a prediction of what the weather will be at the market this Saturday!