Billy and Red were foundlings.  As in, two tiny things tumbling down a brushy hillside, mewing, they found us. Ivin and I were out looking at land for sale and heading back to the car.  There were no houses nearby to explain the presence of two tiny kittens.  They’d obviously been dumped.  I scooped them up and said I’d take them to the animal shelter Monday.  At home I found they had not been weaned.  Bottle feeding ensued. This was Friday.  Monday evening, Ivin home from work, I said I couldn’t take them to the shelter until the one’s eye infection (Red, not yet named) cleared up because no one would adopt him looking like that. Right. 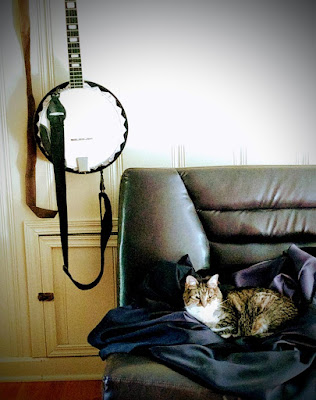 We were surprised to realize, about a year ago, that Billy and Red were considered elderly in cat years.  At a vet visit for Red I remember looking at the lifespan chart for cats and they were at the end of it. 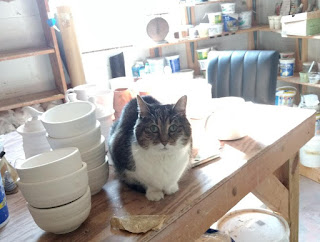 We lost Billy in May.  She had her little talents and peculiarities, just like people.  Soon after she died I wrote a few of these down.  I have past and present tense a little mixed up.  At that time we were still expecting to see her around the corner.

The light jiggles down the hall, reflected from the CD I hold. Billy follows the moving spot of light, intent on understanding this alien encounter and ready to take action, if necessary. 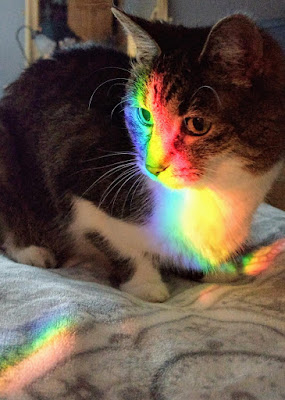 Billy has a mean right hook, so rapid the movement becomes a blur.  Ask Red who, despite being twice her size, has received the occasional ear boxing just for being Red. 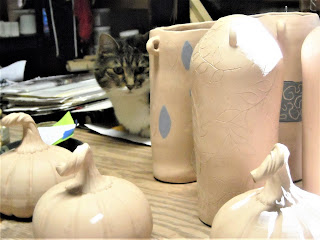 The only thing that foils Billy is foil. Also, thunderstorms.

Her cat superpower faded as she aged, but was incredible when she still had it:  running full bore up the stairs landing, springing on all fours against the wall, making a 180 in mid air, then a dash up the rest of the staircase.

Her bedtime ritual, usually, was to curl up on my chest for a purr-fest.  This intention was signaled by first jumping up on the book I was reading. 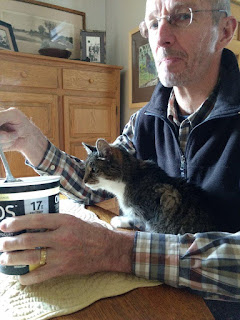 Upstairs had been her domain. (Downstairs is Red’s).  But the last year or so she’d ventured more and more into the downstairs territory.  Her status as a non lap cat even changed, but only for Ivin, who was favored with her presence when he sat at the table.  Perhaps, he being the main tuna salad maker, she thought there was a chance of a treat.

A tummy rub was her daily medication.  She insisted. 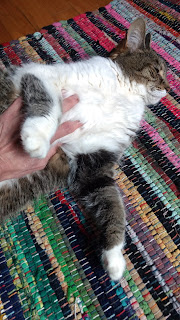 She was my clay table buddy, jumping up with grace and settling down for a good purr, ever diligent in observing whether or not  a jar with soaking brushes or an open slurry bucket were left unattended.  Unapproved water sources were her vice. 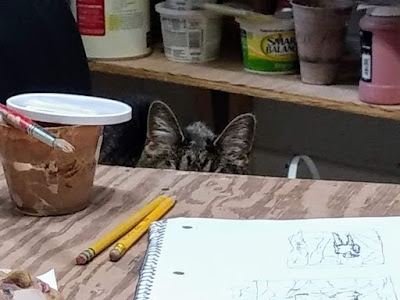 You know what it's like if you've had a pet. They leave their prints behind.🐾
Posted by Melissa Rohrer